Jody Alexander – Generations of Mending – May 2019 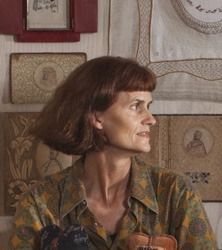 Jody Alexander is a librarian who started her art life as a book artist. Gradually her artistic expression found its way to textiles. Now she’s making a return to paper. Today’s presentation, though, was all about textiles. She finds the art of boro (the name derives from the Japanese term boroboro, meaning something tattered or repaired) appealing because re-using is important to her.

Some background on the Boro technique: Cotton is not indigenous to Japan and would not grow at all in the northern section of the islands. As a result, it became very precious and would be repaired often. These repairs were characterized by many vertical lines, layering and stitching. There were few curves. Straight stitches, including the “little stabs” of sashiko, were strengthening for the repaired item. Japanese society was closed for so long and had a heavy class system, and peasant life was very restricted. Some cotton was provided by rag salesmen who toured the north, but thread was also unraveled from fabric and needles were incredibly precious. The concept of “mottainai”—use everything and waste nothing—was very strong then and now. As a side note, Hitoshi Chiba, the author, described mottainai as follows:

We often hear in Japan the expression ‘mottainai’, which loosely means ‘wasteful’ but in its full sense conveys a feeling of awe and appreciation for the gifts of nature or the sincere conduct of other people. There is a trait among Japanese people to try to use something for its entire effective life or continue to use it by repairing it. In this caring culture, people will endeavor to find new homes for possessions they no longer need. The ‘mottainai’ principle extends to the dinner table, where many consider it rude to leave even a single grain of rice in the bowl.

Fibers and colors that Japanese peasants of the time (Edo period) could wear were restricted, but cotton was allowed, as were the colors blue and brown. That’s why so many of the old boro pieces appear in those colors. There’s lots of blue, as indigo is an indigenous plant. Some dyes, such as the indigo and the brown-tinted persimmon, were also an insect repellent—an important feature in a cloth grain-bag, which was the original use of many surviving pieces. Cloth bags were also used to carry grain to the temples as an offering. Persimmon dyes also provided a measure of waterproofing.

Many homes also had their own looms and kimono fabric could be woven on these. The fabric is narrow and is used selvage to selvage. Fabric was woven from hemp and wisteria, as well as the rare and precious cotton.

Ms. Alexander’s appreciation of the art of boro has also led her to other textile art produced in a similar vein:

Contemporary artists that Alexander admires include: 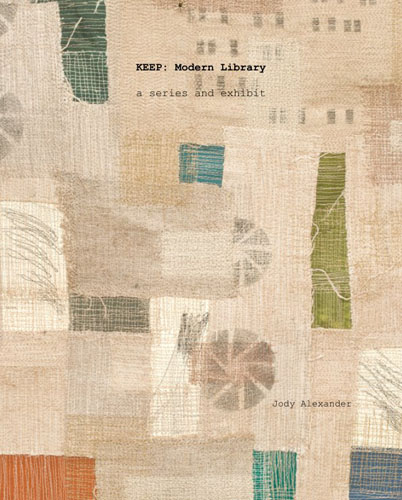 Jody Alexander’s current work, KEEP Modern Library, features old European linens, withdrawn library books, and book cloths, especially those from the 1940s and 1950s. Their faded and stained appearance strikes her as very “boro-ish.” She has produced sampler books using the book cloths as patches. Artistic inspiration is also provided by her Bibliomusesbooks that have some feature that catch the eye. Some of these muses? How to Know the Mosses and Liverworts Genetics, Paleontology and Evolution: No 1 and 2, The Impact of Social Science, The Scandal of Silence—which had a sort of Shroud of Turin image worn into the book cover, and a well-used collection of Hemingway’s novels. These Bibliomuses have recently served as inspiration for some “Bibliofrocks.”