A weekend with Jan Bones

On Friday evening, Jan gave a demonstration on draping techniques. While it’s possible to go through the process alone, it’s much easier to do it with another person. She suggested that we start by draping on the right side of the body, as that is generally slightly larger than than the left side. Jan draped a skirt muslin describing every step as she went. Only half of the skirt is actually draped, starting with the front, and including a dart. The second item was a waist-length bodice with a side seam. After establishing ease, she created a bust dart by assuring a nice shape while keeping the hem parallel to the floor. She started both pieces by establishing a center front line by making a vertical fold in the fabric. She then created a bodice back, starting by establishing the center back, then creating a smooth neckline, followed by a shoulder dart then shoulder seam. For those with a rounded upper back a dart at the neckline may be a better option. In an a-line skirt, the waist dart is moved to the hem, as Jan demonstrated on a dress form. After fitting the muslin on the body, it is removed and the ease lines, seams and darts are marked. She ended by showing how to shape collars on a dress form. This allows a great way to experiment with different collar designs, varying the height, curve, and overall shape.

Jan instructed us on the advantages of working with bias, and ways to integrate bias into everyday clothing. She started by explaining true bias, and how to establish that in our woven fabrics. Jan reviewed layout ideas, and how bias layouts don’t always use significantly more fabric than using straight of grain. She then offered different techniques for seams and hems, including a great trick for pressing curved seams over cardboard prior to sewing. She encouraged us to use single fold bias tape for finishing necklines, although a traditional facing, particularly in a V-neck, can work well. Jan described how straps are generally done on the straight of grain, but she also described a way to do thin straps on the bias.

After the presentation, Jan presented a trunk show of garments she has made from her patterns using very creative techniques to make them extra special. She also had a selection of her patterns for sale, many of which sold out.[ifso id=”32670″]

Jan walked us through various techniques to manipulate darts, including moving them into a seamline. This is a good way to use patterns you already have. Students created a workbook illustrating eleven ways to alter pattern designs. Jan started by showing how to move a dart to point to the bust point for a better fit, which many of us could benefit from. Other techniques included moving a dart to another location, such as creating a skirt or bodice front yoke, moving a skirt dart to a flare. She even showed us ways in which playing with a back shoulder dart creates interesting design options.

Jan led students through a hands-on workshop sewing a knit camisole. Each student was provided with a kit that included a camisole already cut out to her measurements. Jan shared a wealth of tips and tricks that make assembly much easier and with better results.The first step is stitching the lace into a V and attaching it to the front neckline. Darts and elastic were added along the top edge. Options for hemming were shown, and Jan even offered tiny rosettes to decorate the center front of the camisole.

Jan gave everyone a booklet describing each technique and sample pieces for practicing them. She emphasized that these techniques may work in a variety of places, and they are not limited to how she uses them in her sample garments. One of her often-used finishes is single fold bias tape. This is a simple notion, which has been in use for generations, is still a great option for armholes and necklines. Picot edge elastic application was practiced in a way that it is visible from the right side. Jan used this as a neckline finish on a sports top. “Ah ha” was heard around the room as people practiced a technique that creates a facing and contrasting binding at the same time. The bound edge collar and exposed zipper were techniques that completed the very full program.

And the feeling was mutual – Thank You note from Jan Bones 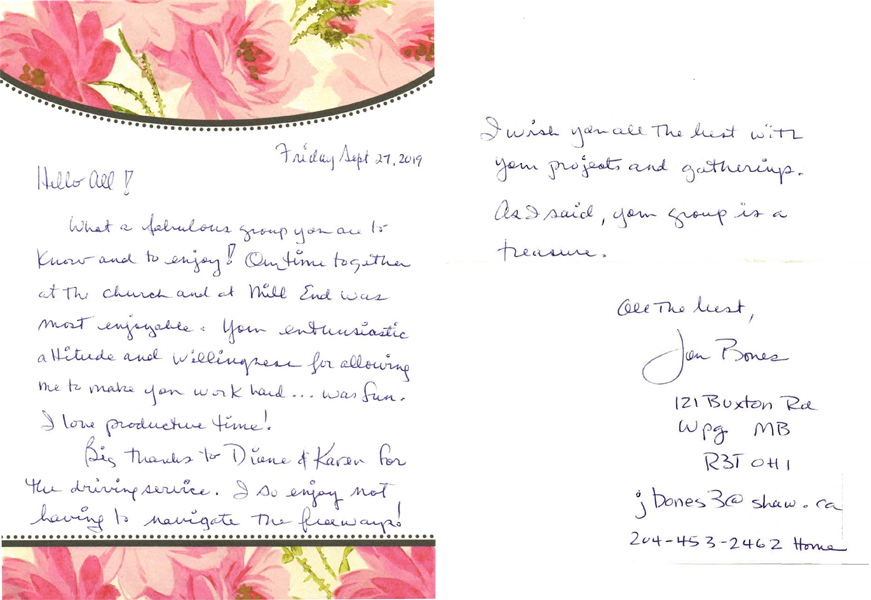