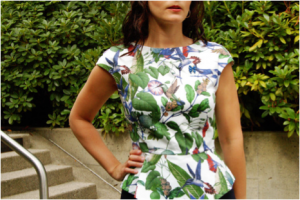 Hey, everyone! In the comments of this post (Bird-print Peplum Top: Burda 6977) Angela wanted to see how the armholes were finished. So I thought I’d demonstrate it. Like most things in sewing, it’s easier to explain in photographs rather than just with words. I did deviate from the instructions a little so I’ll show you what I did.

This is one way to finish the armhole of a lined or unlined garment and it’s relatively easy to do. The advantage of sewing bias tape to a lined garment at the end is that you can smooth out the lining with all other edges sewn, and know that your armhole edge will be flat and smooth with no lining bubbling up. And, you can do it at the end of the construction steps when the blouse is nearly complete, in case you want to make minor adjustments.

Very nice! The trim won’t show on the right side of the garment, and the stitching is invisible if you sew the binding by hand.

Now here’s how to sew it. First, you’ll need to have your top sewn with everything else completed. This is the last step. The zipper has been inserted, the neckline edge is finished with the lining, and all that’s left is the raw edges of the armholes.

The photo above shows the completed top but for this demo, imagine that the armholes are not finished. Instead, the raw edges of the lining and main fabric are meeting along the opening.

If your fabric is quite slippery, you might want to baste the raw edges together before attaching the bias tape. This is a good time to smooth out the layers, making sure there are no bumps. Both of my fabrics are cotton so they tend to ‘grab’ onto each other, smoothing them out was quite important.

Now I’ll use scraps of fabric to demonstrate. It’s really quite easy but since you asked, I thought I’d show how it was sewn. Here’s my little fake-armhole to show you:

You can see that even though this is just a tiny sample, it’s easy for the lining and main fabric not to line up once the other edges are finished. One fabric might have more give, or one layer might be cut slightly bigger. Or if you’ve rolled the lining to the inside around the neck edge, then it might be a little off once it reaches the armhole.

Next, we’ll cut a length of bias tape to fit. Add a little extra as it’s hard to pin with the bias tape still attached to the package, but you might use up more than expected going around the curves. I’m using blue for this demo so it’s easier to see.

In the instructions, they have you using a piece of bias-cut lining as the binding. I didn’t do that, as I felt both my lining and main fabric were too stiff for binding. I used purchased bias tape which was much narrower than their piece. Instead of folding the bias strip in half and sewing it to the armholes, I unfolded one folded edge of the bias tape and aligned the fold on the seamline. A little fiddly, but it works! For a dressier blouse, I’d use the strips of lining instead.

Now, working from the right side of the armhole, line up the bias tape along the seamline. You could either trim down your seam allowance of the blouse to match the unfolded edge of the bias tape, or you could draw in the seamline 5/8″ (1.5cm) from the raw edge and use that as your guide. I chose the latter for the blouse and for this demonstration.

The trickiest part is working around the curve under the arm. In this case, try not to stretch the binding too much, but ease it around the corner evenly. Better to use lots of pins than to get puckers in the bias tape.

Now, sew along the seamline. It’s easy to use the unfolded-fold as the guide.

Now if you like, you can understitch the bias tape so it stays on the inside of your garment. It’s a nice extra step for a cleaner finish.

When understitching, make sure the tape is flat and you’re not sewing puckers into the edge. On the make it easier, it’s probably a little more challenging on the actual armhole. Press the bias tape flat.

To finish off, you can either hand-stitch the binding to the lining or topstitch by machine. I wanted an invisible finish on this blouse so I slipstitched the bias tape in place.

For this demo, I edgestitched close to the edge of the bias tape and it looks pretty nice too.

So that’s how to sew bias tape around the armholes of a lined garment! 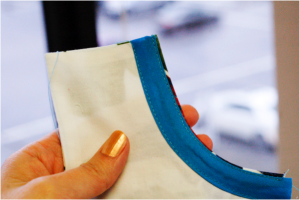