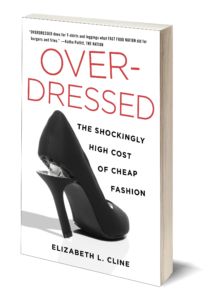 This eye-opening book was first published in 2012. It was an immediate success, and the paperback came out the next year with an afterword about the clothing factory collapse in Bangladesh.

The author was laid off her job at a magazine in 2008 at the start of the Great Recession and was forced to look at her spending more closely. Clothing seemed a good place to cut her budget. So, she emptied her closets and drawers, boxes and bags to see what she had. She was shocked by the quantity, realized she was not alone in her buying habits, and started her book.

The chapters cover Fast Fashion, overseas production, the loss of mid-range clothing, recycling, and how to “make, alter, and mend” clothing for yourself.

She discusses the quantity of today’s clothing, how it’s made, where it’s made, and what happens to it in its “afterlife.” She compares today’s standards with the standards decades ago.

The chapter on “The Afterlife of Cheap Clothes” is equally startling. On average, only 20% of donated clothes go into second-hand stores. The remaining items are mostly too damaged or too out-of-date. Vintage is different. But the author points out that there is little true vintage in second-hand stores today. There is little quality clothing being produced, and no one wants to collect today’s cheap clothing. So, the unwanted items are …? Recycled? That works for some of it, but about half of our wardrobe is now polyester, aka plastic. Overseas? Yes, some is baled and shipped to Africa, where American castoffs cut into the local clothing industry. The rest is looked down on for the cheap quality it is or is simply added to the landfill.

One of my favorite observations, is when Ms. Cline points out that young men in offices will spend $1,800 on a laptop, while wearing shoes from Wal-Mart. (I think of women buying $20,000 sewing machines then using bargain bin thread).

She does do a wonderful section on sewing for oneself, making clothes from scratch, mending, and altering. She highlights several people who have found sewing better than buying. Some for the quality, some for the creativity, and some for the self-satisfaction.

She covers the whole process. And it is shocking. I look at clothing in stores with a far more critical eye. I see the sameness, the cheapness, the dullness. And I’m glad I can sew.

Overall, this book is fantastic, and I highly recommend it to anyone who wears clothes.